It was announced today that on Saturday President Bush will undergo a “routine” colonoscopy. It was determined at this time, due to the bizarre events surrounding the president’s desire to axe Big Bird and invade Sesame Street, that perhaps it would be best if this procedure were carried out by a qualified neurologist.

Bush tried to convince everyone that it wasn’t an actual brain fart, that he really did have reason to suspect The Count of terrorist ties. “It’s the counting… he’s always counting! I mean, it’s probably a code, right? Why else would you count like that? Do we even know what country he is from?”, he replied when asked why he would possibly think that.

Later in the interview, however, some were lead to believe that perhaps the grudge against Sesame Street was more personal for President Bush, when in the washroom he accidentally left his microphone on, and was overheard saying to Vice President Dick Cheney, “It’s just that I have trouble following the plot. I mean, what are all those letters and numbers they keep going on about for, anyways?” 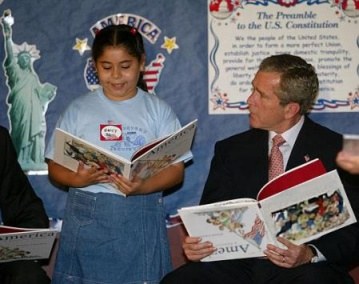 (Image depicting what has been described by some psychologists as a probable flashback President Bush might experience when thinking about Sesame Street.)

In the interim, our country will be ruled with a firm hand by Vice President Dick Cheney, who promised not to break anything in the Oval Office, or shoot anyone, while George was away.