While Google will ban smaller websites from their search results or from AdSense on a whim, usually it takes heavier coverage for bigger players to get hit. Like, for instance, when Google Blogoscoped outed BMW for spammy doorway pages. The story spread relatively fast, and Google wound up banning BMW for a short period of time. So when someone has a “special” relationship with Google, as Jason appears to have, and keeps getting second (and third, and fourth, and fifth…) chances to clean up their act, yet continues to snub their nose in Google’s general direction, it makes one wonder. Google has to be at least somewhat concerned that someone in the mainstream media will eventually notice and start to ask why someone like Jason would continually be allowed to get away with this stuff. Considering the unfairness and lack of impartiality of letting a site like Mahalo slide while punishing so many smaller sites for lesser offenses, my guess is that Google doesn’t actually want to discuss their reasons behind ignoring it. And so, each time Google does nothing, Jason decides to push things a little more.

This time it looks like Jason has decided to go ahead and violate the rules closest to Matt Cutts heart. While the layout I am showing here will change with time, since the header contains rotating articles, currently if you go to Mahalo at the top of every page (on the non-Answers side, anyways) you will see the following block of stories that Mahalo is highlighting (usually this area contains trending or hot news items):

While technically speaking just by looking at them there is nothing to distinguish one of those “featured stories” from another, the one that doesn’t actually belong is the third one in, with the caption “Best Pickup Line Ever?”. The reason that one is different from all the rest is simple… it’s not a Mahalo featured story at all, and has nothing to do with anything going on in the news. It’s an ad. It is a paid link that Mahalo.com sold, one that leads to a site built to market a wine company. There is nothing visual to distinguish or disclose that as an ad, and if we view the source of the page… 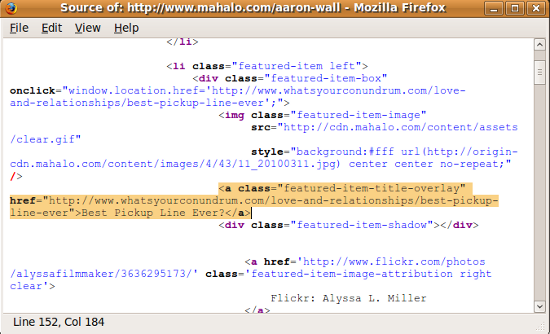 … we can see that there is nothing machine readable (ie. nofollow attribute) to distinguish it as an ad, either.

Matt Cutts has been very, very clear on his take on sites that sell links that pass PageRank, or ones that don’t disclose that they are in fact ads: they are spamming. No if, ands, or buts about it, they deserve to get punished. In fact, he has even gone to far to state that in his view undisclosed paid links violate FTC guidelines.

So, Matt, recently you put out a call for link spam reports, including “paid links that pass PageRank”. Really, though, is there any point in reporting Mahalo to you? Are you going to actually take action, or, like you have done with Jason’s spam in the past, will you continue to simply look the other way? Any other site would be faced with a penalize/ban first, make nice nice with Google later. Hell, with the BMW site you penalized them after they cleaned it up, just to make an example. I get the strangest feeling, though, that won’t happen with Mahalo…

Can you at least say something about this issue…?

Update: in response to a comment below and a question posed by Matt Cutts about what makes me believe that this is indeed a paid link: