A couple of weeks ago, Rand Fishkin of SEOMoz posted a piece entitled, “You’re Not On The List“, designed to educate the public as to “why so many {directories} have little to no value”. This was following their release of a list, available only to SEOMoz Premium Members, of what SEOMoz had tagged as being quality directories. Basically it was designed to convince people that they would benefit from paying to have access to SEOMoz’s list, because the directories not on the list suck so badly.

“This week, Rand talks about directories and why so many of them have little to no value.” -SEOMoz

In his post, Rand decided to focus on the Aviva Directory, and to the best of his ability, show us step by step how even such a popular directory as that could easily be seen to fall under the classification of having “little to no value”. Rand took a fair amount of heat for this from the community at large due to, despite how Rand would like to spin it, him being just plain wrong.

I pointed out in the comments how Rand seemed to have missed some of the more salient points about Aviva, such as the fact that all of the subdirectories I checked ranked fairly well (within the top few-hundred, anyways) for their chosen categories. Without going into all of the details on the methods that Rand used (they can be seen in the post itself, and are discussed at length over at V7N), it should be readily apparent that his methods must have been flawed in some manner. Hell, Aviva even has the coveted “Authority Indented Listings” oft heard about in the forums: 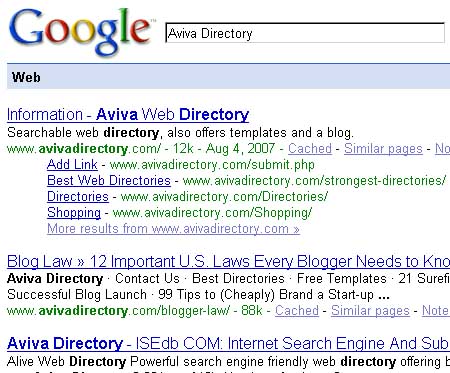 How could you not consider a directory like that quality? Google doesn’t hand out that style of listings with a new toaster when you submit your url… those equate to have the top six listings when searching on their name. Not too shabby by any standards.

Although I pointed out to Rand how he must be wrong (in several places actually), he never did respond to any of what I posted. I defended him at one point, when someone raised the question of whether or not Rand deliberately chose the factors he used to show why Aviva sucked, considering how many other indicators showed the opposite. My response was that it had to have been random, based on how bad he was going to look when he was shown exactly how sloppy his methods and conclusions in the matter were. I gave Rand the benefit of the doubt as far as the honesty of his intentions went.

Was I being stupid in doing so?

This past Friday, Rand did a nice little post on reputation management. This post is shortly followed by quick tag team style sequel from SEOMoz member Jane Copland entitled, “When to Respond to Criticism, and When to Keep Quiet“. While many people may not catch it, Rands starts his bit with spin from the get go. In the paragraph introducing the video we see the line “we caught some heat in the forums (albeit largely from disgruntled directory owners)”, reinforced in the beginning of the video with Rand saying, “some directory owners got pretty upset with us”. This of course leaves the visitor with the impression of “Well, of course, they were biased”. He wraps up the lesson saying that when defending oneself, he endorses responding, engaging, being honest, and apologizing when you have erred. If he’s endorsing honesty, then of course he must be practicing it, and if he says it’s ok to apologize, then it must be that the only reason he hasn’t done so is that he was not, in fact, wrong.

Now, I didn’t stalk Rand over the whole Internet, so obviously I may have missed something, but from what I could tell he pretty much went out of his way to avoid addressing the issues that people brought up, and instead spent his time defending his position that Aviva sucked. He even posted more misinformation to back up his claims on V7N, where he stated that Aviva must actually be under a penalty, because it doesn’t rank in the top 10 for one of it’s articles (it’s actually #1… is it possible Rand doesn’t actually know how to use Google?update). Rand does post again in the thread, but rest assured it is not to make any apologies for being wrong.

Jane’s follow-up post on When Not To Respond To Criticisms of course does nicely justify Rands lack of meaningful replies. In a nutshell, her 4 reasons for not replying are 1) when the criticisms are not based on fact, 2) the poster was anonymous, 3) the poster is a troll, or 4) you’re just too pissed off to reply sensibly. Since we already know from Rand’s video post that we can trust him, obviously the main reasons for Rand not replying to non-anonymous legitimate questions or criticisms must have been #1 or #3. Right? I mean, it doesn’t matter how many cold hard facts someone presents to you, once you’ve called them a troll, you’re right and they’re wrong… period.

For those of you convinced that Rand’s errors in his evaluation of the Aviva directory were honest ones, despite his total lack of coming clean, that Rand is at heart a trustworthy person, let me enlighten you to a little known bit of history. Three years ago, when Rand first started hanging out on the forums, before he created SEOMoz, Rand spent the bulk of his time (according to him) on one client, Avatar Financial Group. He had a reciprocal link directory on their site that he was promoting. This may seem fine and dandy, but he was blatantly ripping of the link partners by purposefully blocking the search engines from seeing the links page via robots.txt. Now, Rand did apologize, here and here… but only after his actions were made public. When initially confronted and questioned about it, Rand lied through his teeth, stating that blocking the pages was “a common safeguard against linking out to bad neighborhoods” (the original post where he made the claim was deleted, but can still be viewed on the Internet Archives). This claim was made to real estate webmasters, not to other seo’s, and obviously he was banking on them just not knowing any better. Do I think that we need to crucify Rand for acts of pure dishonesty from 3 years ago? Of course not, I’m not saying anything of the sort. Do I think it should be kept in mind when reviewing current behavior…?

One last thought. When slamming the Aviva directory, how is it that Rand never thought to compare his own directory, socengine.com, against it in a side by side comparison? Could it be because he knows that using the same criteria would show that the directory he was slamming was actually better than the one he owned? Or, was that oversight an honest mistake as well?

Update 08/14/2007: Aviva is actually no longer ranking for the phrase I mentioned there, and I apologize for not caching the search as I often do. To be fair I should mention that of course it is possible that there were discrepancies between datacenters when Rand and I performed the same search. However, I would like to point out that if you remove the extra terms, in essence increasing the competitiveness, Aviva is actually in the #1 spot: [brand on the cheap].