I am a big one for testing, and test this tool I did. Now, I know, I may have voiced some opinions in the past as to my doubt of the sincerity of Rand Fishkin and the folks who run things over at SEOmoz, but regardless of what I said before, for me seeing is definitely believing. I plugged both the url for the post introducing the tool itself, along with the phrase [made up statistical bullshit], into the tool’s interface, and sure as hell this is what the tool showed me: 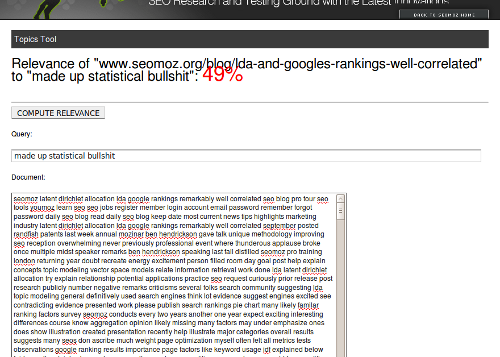 I mean, c’mon now… those words weren’t used anywhere in the article, yet this tool was able to accurately determine that at least half* of everything that Rand said was relevant to that phrase?

I don’t know about you, but I’m convinced. 😀

* and yes, I know, the tool guessed numbers that were way low compared to the actual quantity of bullshit in the article, but seriously… you know as well as I do that any tool that can automatically detect even trace amounts of bullshit in a post is going to be a game changer. 😛