Want to explore the entire planet from your computer? Normally all anyone wanting to do so would have to do would be to trot on over to Google Earth, download and install their application, and off globe trotting they could go. Today, unfortunately, those who do not already have the program installed are apparently out of luck. It looks like today one of the brighter Google engineers working for one of the world’s leading tech companies has somehow broken not just one of the download links for the application, but all of them.

The first place many people would find one of the download links is right in the Google serps, once under the Google Earth sitelinks and once as it’s own listing:

That particular download link, earth.google.com/download-earth.html, is being redirected to what I am guessing is an agreement page, http://www.google.com/earth/download/ge/agree.html. This, however, returns a 404: 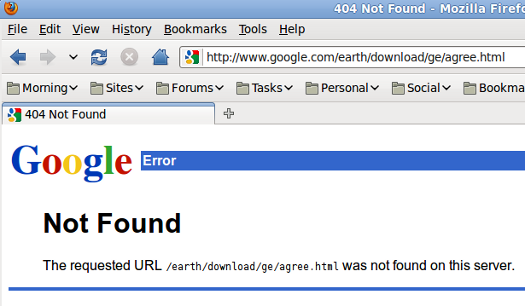 The second place people could normally download Google Earth from would be to go to the Google Earth homepage, which was previously located at earth.google.com, but is now being redirected to http://www.google.com/earth/index.html. There you can find 2 links, one in the left navigation and one as a large blue button with the text “Download Google Earth 5”:

As inviting as that button is, however, it is simply teasing you. Both the link and the button trigger a Javascript function named earth.downloadEarth(). Normally downloading the entire planet would be a huge power trip… today however you get from clicking the button is “Server not found”:

It looks like the reason for this one not working is because someone got sloppy when changing the links from earth.google.com to www.google.com, and simply combined the two into http://earth.googlewww.google.com/intl/en/download-earth.html, although that particular page doesn’t exist on either domain so obviously they messed up more than once. Also, what is even odder, is that the Google Earth packages are also missing from the Ubuntu download repositories:

To have Google Earth not be installable from anywhere seems almost as if there is something deliberate going on. Is Google going to phase out one of it’s cooler applications? Or is something new coming down the pipes from them that will replace it? Only time will tell.

Thanks to Donna Fontenot for discovering this today!