I was perusing Sphinn today, and noticed a submission in the Top 10 list entitled “Google University Bulgaria turns into a PR disaster“. Disaster? Wow, I thought, I had better read that!

Turns out it had to do with a bunch of people registering for an invite only Google event, and then Google rejecting a bunch of those registrations. Yes, a few people who were invited were rejected as well, but to be fair it was billed as first come first serve. To me, not that interesting a story. I didn’t Sphinn it myself, but I was curious who it was that had.

When I clicked on the “Who Sphunn This Topic?” link, I noticed a fair number of people who had no avatar: 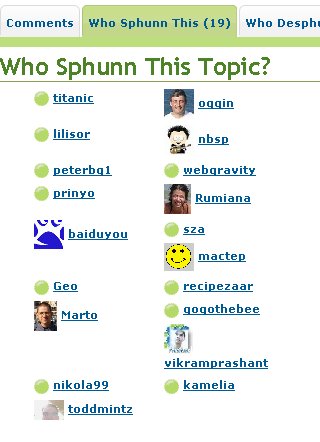 Since it is unusual to see most of the Sphinners on a popular topic are newbies, I clicked through to a few of their profiles to see more about them. As it turns out, over half of them registered today, and this was the only story that they had all they Sphunn:

This includes the person who submitted the article. Not always, but often that is a sign of someone trying to game Sphinn. Which, ok, so what… others did Sphinn it as well, and if anyone wanted to report it as Sphamm then they could have.

The really weird part, though, is that when I clicked through to one of the profiles listed, I saw this:

I went back and verified, and yep, the number of Sphinns counted (19) matched with the number of names showing, including the banned person. Considering the number of votes is usually takes to get into the Top 10 list, and the amount of additional exposure having that happen generates, it is very possible that the one vote that was cast by the banned profile is what made the difference between that story going hot or not (although of course we will never know for sure).

1 thought on “Banned From Sphinn? No Worries, Your Vote Counts Either Way”