Today Mybloglog went live with a new profile layout. In it they have incorporated a feature, by default, that shows everybody what their friends are Twittering (assuming that they have added in their Twitter information, of course). Twitter has apparently promptly responded by having a nervous breakdown. 😀

I know, Twitter is a huge community to start with, and should be able to handle large amounts of traffic. Google is currently showing that they have 3,470,000 of their pages indexed:

However, Mybloglog is far from tiny, with 1,150,000 of their pages indexed right now as well:

For both sites the majority of those pages are all profiles of their respective users. Those of us into marketing probably assume that the vast majority of people who use Mybloglog are already avid Twitter-ers, but this probably isn’t actually the case. This means that there were likely hundreds of thousands of extra visitors to Twitter today, as people checked out what their friends were up to and tried out the service for themselves. This has apparently resulted in Twitter developing a few quirks, from just not responding:

To forgetting what reverse chronological order actually was: 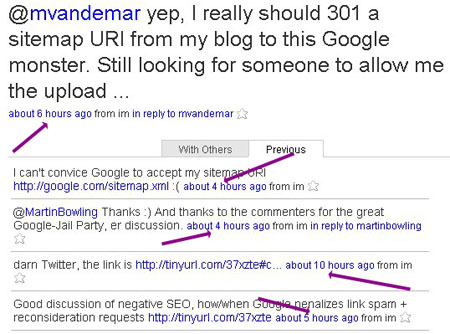 To simply removing the main profile page for everyone: 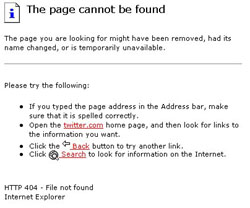 Of course, with all of the Twitter addicts out there, I’m sure they’ll eventually adjust. Hell, there’s even people out there composing love songs about Twitter nowadays. 😀