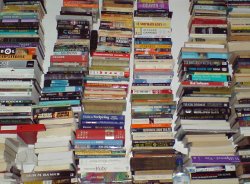 Today I was tagged 3 different times in a Facebook meme targeted to “nerds”. The premise is that there is a list of 100 books, and “The BBC believes most people will have read only 6 of the 100 books listed here.”

Apparently, I really am a nerd. I know how these things go, and was fairly certain that this would turn out to not be the original list. For one thing, it included series of books and counted them as a single book, and then overlapped them with individual books in the series (ie. the list included both The Lion, The Witch, and the Wardrobe individually as well as The Chronicles of Narnia), and there appeared to be no common theme whatsoever in the list (classics mixed with pop culture mixed with some rather obscure titles). Also, it was quite obvious that it wasn’t a list of “must reads”, since there wasn’t a single Neil Gaiman book included.

Out of curiosity and being the geek that I am, I decided to track down where it started and see how much people modified the original list to suit themselves. It looks like this list actually started as BBC’s Big Read, which was a viewers poll the BBC conducted back in April 2003. The list itself was from the search for the UK’s “best-loved novel”, and was composed the top 100 books chosen by the BBC’s audience, in order. According to that list, the top “novel” was JRR Tolkien’s “The Lord of the Rings” (which is also a series and not a single book, and probably there at least in part due to the fact that the Peter Jackson movies of that series came out from 2001 – 2003), followed by Jane Austen’s “Pride and Prejudice” at #2 and Philip Pullman’s “His Dark Materials” (which again, is a trilogy, the first book of which the 2007 movie The Golden Compass based upon) at #3.

Some interesting (if you really are a nerd) differences between the two lists are:

And now, the meme itself, using the current version of the list:

“The BBC believes most people will have read only 6 of the 100 (minus 2) books listed here.”

Tag other nerds (including me.)

5 thoughts on “Evolution of a Book Meme”