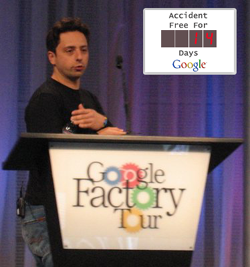 Often times in factories around the country, looking up on the wall you can see a chalkboard or a sign boasting of how many consecutive “accident free” days those on the job have enjoyed. These are placed there as a form of encouragement for workers to be careful, to encourage healthy competition between departments, and are often coupled with a sense of pride and accomplishment as the number in the display rises day after day. If and when an accident occurs, that day the number is reset back to zero.

Were the Google Factory to have such a sign on it’s services, then, unless there was a more recent incident that I am unaware of, it would currently read a mere 14 days.

Due to a recent glitch, users who logged in within the past week were greeted with the following message:

With the most recent mishap with data at Google, coupled with the release yesterday of Google Health, I have to ask myself… should the Google Health Tour and login pages contain some sort of indicator, a warning to people, that these data accidents can, and indeed do, happen?

With the types of services that are offered with Google Health, it seems obvious to me that the main target audience here will in all likelihood be the elderly… those who would be more prone to having health issues, and in need of a way to organize them all. Chances are that a large portion of them will not be near as technically savvy as other users of Google Apps are. Shouldn’t special care be taken to make sure that they understand the risks they are taking when putting their data in the hands of Google? I mean, if Google can go as far as to label sites that they think might contain malware, surely they can put a simple little warning label on one of their apps that they are asking people to entrust sensitive… extremely sensitive… data to, right?

Now, true, the most recent foul up with Google Analytics wasn’t that bad… I mean they did recover most of the lost data. But what about the little mishap they had last year, where they had to fix a security hole that exposed the address books of Gmail users?

Google has fixed a security hole in several of its services that exposed the address books of Gmail users, the company said Tuesday. An attacker could create a malicious Web site that would copy all the entries in a Gmail user’s address book, a potential treasure trove for spammers, according to a description of the problem on the “Googling Google” blog. – via News.com

Google regularly finds and fixes flaws in their services. In fact, sometimes they have even had to rely on the community to find bugs for them. However, instead of letting people know that there is in fact a risk, and that accidents do happen, they are doing the exact opposite. Right on the tour page for GHealth, we find the following statement:

So is it safe? Yes! We believe that your health information belongs to you, and you should decide how much you share and whom you share it with. We will never sell your data. We store your information securely and privately. Check out our privacy policy to learn more.

Two years ago there was a slight corruption in the regular Google index, and one of my websites was attributed to have the backlinks and PageRank of someone else’s website. I wrote in to Google to let them know about it (out of concern that there might be a deeper underlying problem, not because I didn’t want the extra 2,000 links, just so you know 😀 ), and eventually things did get fixed. Imagine, however, if a similar mishap ended up causing the wrong party to be able to view someone else’s private health data. Considering the ramifications that such a mishap could have, I think a little warning sign letting people know how often accidents happen isn’t much to ask for at all.

2 thoughts on “With Only 14 Accident Free Days At Google, Should Google Health Come With A Warning?”