Yesterday over on Daggle.com Danny Sullivan published a post titled, Of Misleading Acai Berry Ads & Fake Editorial Sites. In the article Danny discuses a rising trend of deceptive marketing practices involving fake news sites, the way they rip people off with products they are selling, and the fact that authority sites such as the LA Times are the ones carrying these ads, lending them some credibility in the public eye. Danny states in the post that the ads showing are being served by Zedo, and that he wishes the ad network should raise it’s standards and not allow such blatantly misleading advertising:

Personally, I’d like to see Zedo up its standards for the type of ads it will accept. This type of junk shouldn’t be allowed. – Danny Sullivan

He’s right, too, the ad networks should be policing this type of deception, by all means. Matt Cutts, Google’s head of the web spam team, agrees. He tweeted about the story, and also commented his take on the matter in the post itself:

My favorite part of the disclaimer for those type of sites is “This website, and any page on the website, is based loosely off a true story, but has been modified in multiple ways including, but not limited to: the story, the photos, and the comments.”

Oh, so I can trust the website except for the story, photos, and comments? In other words, the entire website?

And if you read the disclaimer carefully, most of these sites promise a “free trial” with $1.95 in shipping, but actually set your card up with a recurring subscription. The “one weird old tip” ad that I clicked from the L.A. Times mentioned this in the fine print: “If you do not cancel within seven (7) days of the date that you enroll in the Program, we will charge the same card you provided at enrollment the non-refundable one-year membership fee of $149.95”. Then they also start charging you $12.95 a month. Grr. – Matt Cutts, on deceptive “flat belly” ads

Danny also mentions in his post about how “The ad, unlike Google’s ads, doesn’t report what ad network is delivering them,” which if they did would be a form of disclosure. And Danny is right… except for one thing. Danny derived the fact that the ad was being served by Zedo by examining the url. However, if you view the source on the LA Times article and go to the spot on the page where the ad is showing, you don’t see the Zedo ad network code. The ad itself is being generated by Javascript that is being pulled from yet another ad network:

The actual ad network that the LA Times has a relationship with, and the ones responsible for what ads show on their site, is Doubleclick. And who owns Doubeclick, you might ask? As most of you probably already know, Google does, since they bought them back in 2007 for $3.1 billion. So obviously not all of the ads Google delivers disclose what network they are from.

It gets better. AdSense, Google’s flagship advertising network, serves what are known as “contextual ads”, where in theory the ad targeting is based on the context of the page contents where the ad blocks are placed. Danny uses AdSense on his site, with one of the blocks being at the very top of the page. Due to the various feeds in the sidebar, the content of the article, and the title, “Acai Berry” is mentioned 8 times on that same page. Therefore it is only natural, of course, that this is what we see when we look at the ads being served on the top:

Now, can you guess where that ad leads? That’s right: 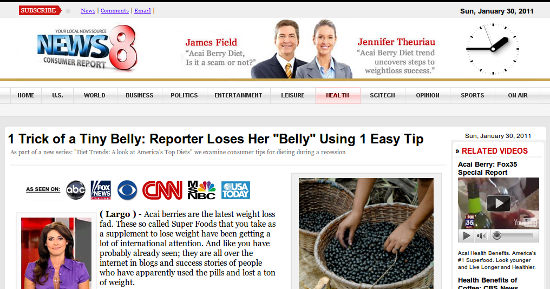 It’s a fake news site identical to the one Danny is discussing, with the same text, layout, and even images embedded in the “story”, with the only variation being that the one Danny landed on is “News 7”, and this one is “News 8”.

What makes this story particularly interesting is that recently Matt Cutts visited Washington D.C., lobbying the FTC about Google’s integrity, trying to convince them that they don’t require government oversight, and how they could be trusted to police themselves. Google also happens to be in a very unique position to help clean up these kinds of abuses. Not only could they pull these ads from their own vast array of properties, and require their third party partners to do the same, but they could also warn publishers who use networks that continue to promote scams that their sites rankings could suffer, in the same way that they have punished websites in the past for what they said was deceptive marketing, in the form of undisclosed paid links. Instead, they themselves appear to be participating in the problem, not the solution.

So, Matt, are you willing to back up your testimony to the FTC about Google’s integrity, and lobby within your own company to help eradicate deceptive marketing from the web? Do you feel that websites that allow deceptive advertising to be shown on their sites should have their trust revoked?

22 thoughts on “Matt Cutts Criticizes Deceptive Ads, Doesn’t Realize Google Is The One Serving Them”