Ok, good, you’re back. If you followed some of the aftermath in the comments, on Twitter, and on various media outlets and celebrity blogs around the web (including Gawker and Wil Wheaton), you can tell that Jenny obviously has a large amount of supporters who were less than pleased at Jose Douche Canoe Martinez. The outcry got just loud enough that Brandlink Communications actually started to play the wounded bird card:

Apparently Jose Martinez felt so victimized from the whole experience, he actually decided that he needed to delete his entire Twitter account (or, of course, it could be that he was trying to do the internet equivalent of burning the evidence of his douchiness).

Quick side note: if a PR company’s first instinct when they come under fire is to duck and run, and get defensive, as opposed to owning up, making it right, and the moving on, then odds are that same PR company would not hesitate to throw a client under the bus if they felt it was necessary for their own self preservation. Anyone who is researching this company with the possibility of hiring them should probably keep that in mind.

Either way, I guess Jenny didn’t realize quite how much support she would receive, so she wound up actually asking her followers to put away the pitch forks:

UPDATED: I love you people. Really. Thank you for always having my back and for being so supportive during this weirdness. Jose has apologized, and I’ve been assured by the woman in charge of the company that they are aware and are handling it the best way they know how, so let’s give them some air and let them have the chance to do that. *deep breath* – Jenny Lawson, aka TheBloggess

Ok, so, maybe Jenny is right. Maybe some of her fans did get abusive towards Jose in the process of defending her (which, btw, I did not see myself, but I am guessing not everyone was polite) and it is time for us to let cooler heads prevail. However… I also don’t think this should fall just into internet obscurity, either. People who are looking to hire this PR firm should be able to find out who it is they are dealing with, and the first line of defense when doing research on a company is, of course, Google. Currently when you do a search for [brandlink communications], someone else’s post about Brandlink and TheBloggess is #1 (as a news story though, not as a regular listing), Brandlink Communications themselves show up next (which is actually the natural #1 listing, when no news stories show), and in the natural #10 spot is Jenny herself: 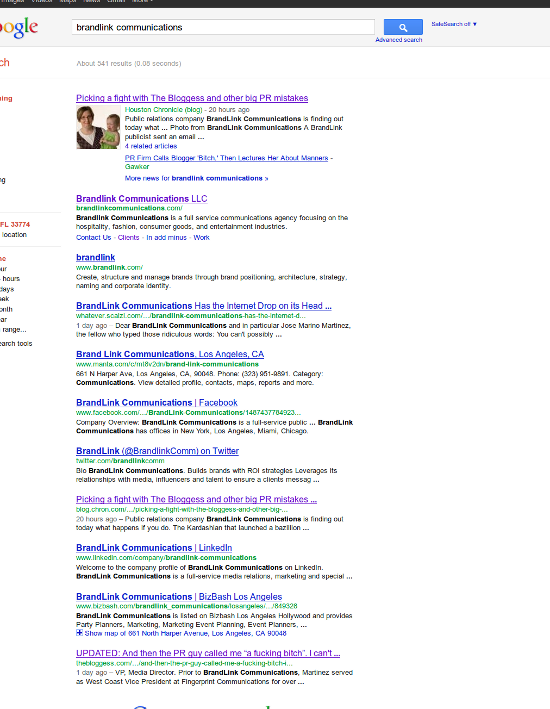 The news piece is of course only there for a short period of time, as all news pieces should be, and the rankings Jenny’s site has currently are probably also due to what Google refers to as QDF, or Query Deserves Freshness (where a particular search might warrant different results due to topic being “hot” at the moment). However, I think that Jenny’s site should be in the top 10 when searching on that company, even after the buzz dies down… possibly even #1. Therefore, here is what I suggest, if you happen to support Jenny in this issue:

For those of you wondering why, it is because links are still the number one factor Google uses when determining rankings. If you want more information on it, you can Google [santorum] and do some research… just don’t click on the first link. 🙂

Do I think this is too harsh? Perhaps if they weren’t a PR company boasting W Hotels and Chase as their clients I might be more inclined to go easy on them. However, even if they weren’t big shots treating those they regard as the “little people” like shit, there is also the fact that this behavior is not new for Jose, and there is evidence of him treating people like this all the way back to early 2006. The fact that the same guy is still VP Media Director 5 1/2 years later, still behaving the same way, makes the promises from the company that is “handling it the best way they know how” somewhat hollow. So yes, with that in mind I think that a response like this is quite fitting. Vote with your links, people, as Google intended you to. 😀