Last Thursday Barry Schwartz (Rustybrick) reported over at SERoundtable about a discussion going on in a Google Groups thread, having to do with a webmaster who had dropped 6 pages from the #1 spot, but was still seeing sitelinks when he did get to his listing. Barry said that he did not see the listings for himself, and was wondering why no one else could see them (he knew they were real due to a screenshot the webmaster took here).

The answer to Barry’s question is that in order for the sitelinks to appear, even for a penalized site, the listing still has to be the #1 listing on that page. So, you have to play around with the parameters manually in order to get it to work. For instance, I currently see him at the top of the page when I change it to start at #62, using the &start= parameter, using this query: [vacation realty] (cached version): 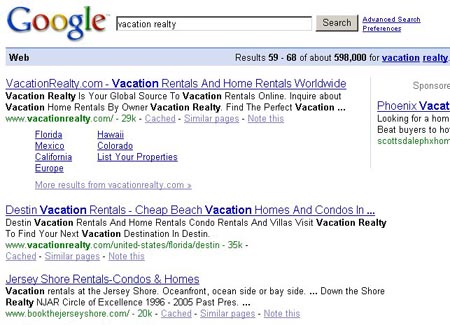 What this strongly indicates is that the -60 penalty is indeed more of a manual process rather than an algorithmic one. The engineers on the web spam team have said, Nope, we can’t let you be number one (for whatever reason it is they decided to penalize the site), but as far as the algo is concerned we’re still looking at a site that should have some authority. This does in fact make sense… the site in question might have plenty of ranking power coming in through legit methods, regardless of what it did to incur the penalty (which, reading into a comment made by JohnMu in the thread, appears to be overzealous linking practices, including using sponsored themes to gain links). In fact, often times just being #1 can facilitate people linking to you. Of course, this does slightly go against something Matt Cutts said last year, when he stated that assuming a site shouldn’t rank just because it buys paid links is committing a logical fallacy (ie. just because they buy paid links doesn’t mean Google will penalize them), but of course this wouldn’t be the first time Matt has changed the game. The most notorious case is probably when he went from these claims (found here):

The rel=”nofollow” attribute is an easy way for a website to tell search engines that the website can’t or doesn’t want to vouch for a link… In an ideal world, nofollow would only be for untrusted links… Anytime you have a user that you’d trust, there’s no need to use nofollow links. – Matt Cutts, May 15, 2006

to not much further down the road to asserting that anyone who accepted money for a link they didn’t nofollow was a spammer.

The question is, without cleanup, how long will a site that is exhibiting behavior like the one in question retain what authority it has left, before it is removed altogether? We know (or at least can reasonably assume, based on observation) that with the Google PageRank penalties that ran rampant last year, at first they were simply cosmetic, designed to inhibit people who were selling links based on the PageRank of their sites from continuing to do so. The rankings of the sites pretty much stayed the same. However, when we look at John Chow’s site, and do the same kind of manipulation, his does not show sitelinks any longer (which, iirc, used to be the case when searching on his name). So I think it’s safe to say that if Google does send you a warning shot across the bow, it would be wise to clean up the site before it becomes more permanent in nature (assuming, of course, that sort of thing matters to you).

5 thoughts on “Sitelinks at #60 – A Warning Shot From Google”