Last night Dennis Kucinich (D-Ohio) introduced 35 articles of impeachment against George W. Bush. This would be, to most reasonable thinking persons, newsworthy. CNN, however, appears to think otherwise.

24 hours later, and not one word from CNN. I did a search of CNN.com using Google News, and the most recent story involving Mr. Kucinich was back on June 7th: 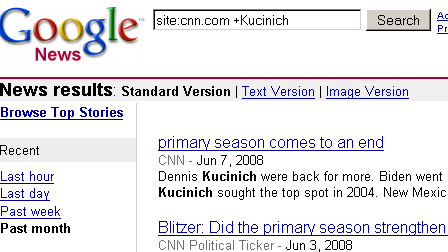 Regardless of the outcome, the mere fact that they were filed is going to have an impact on the US population. How can this possibly not be something that should be reported on?

1 thought on “CNN Refuses To Discuss Kucinich’s Articles Of Impeachment?”