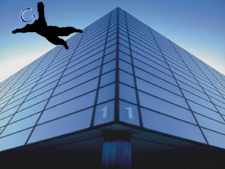 During the Great Depression, the suicide rate jumped over 21.4%. It was a sad time for all, and the unemployment rate skyrocketed. Many people lost their homes and farms. The shame of not being able to provide for their families was simply too much for some. Last June, “Good Morning America” did a segment titled “Recession Depression”, where reporter Chris Cuomo drew analogies between the events back then and our current financial crisis, warning that we could possibly see similar psychological impacts with todays economy:

The link between financial troubles and psychological problems is well documented. In the U.S. the seminal example is the Great Depression, when the suicide rate jumped from 14 to 17 for every 100,000 Americans. And today, with the threat of recession looming large, the price we pay physically may skyrocket as well. – Chris Cuomo

The Great Depression certainly wasn’t a funny time in our history, and the current financial market really isn’t a laughing matter either. While we aren’t quite as bad (not yet, anyways) as we were back then, if things did get to the point where people started killing themselves due to their circumstances I hardly think it would be something we should joke about in the mainstream media. However, one company, Woot.com, apparently thinks it is.

I was performing my daily search to see how bad Google (NASDAQ: GOOG) was doing. As others have noted, they aren’t doing so hot. This I pretty much expected. What I didn’t expect was the AdSense ad making fun of the situation off to the right:

The ad reads, “Before you jump out that window, why not spend your last remaining dollars at Woot?” Considering that the ad is showing on a stock quote search, there is no room for mistaking their message. Pretty fucking tacky, Woot. Don’t get me wrong, it is funny… but really not appropriate advertising for mainstream media. Considering all the press Google has gotten in the past for accidental inappropriate ads (like like Ebay selling Black People, and low prices on Child Brides at Amazon.com), I’m surprised that they are letting something like this slide.