One of the hacks that has been around for a few years has the symptoms of having an index.php in the root installation that has the following code in it:

The index.php found in a clean installation of WordPress does not have an IF statement in it, and the section that is actually delivering the hack is the statement telling the page to include() license.txt located on wordpress.net.in. If you try to view that page in a browser what you currently would see is version 3 of the GNU General Public License. However, if the file is called as an include(), it instead delivers code that acts as a back door and allows, I believe, the injection of an erroneous administrator into the WordPress installation. From there pretty much anything can be done.

The wordpress.net.in domain itself, which is being used to deliver this hack, was originally registered back in April 2007, supposedly to some guy in Massachusetts: 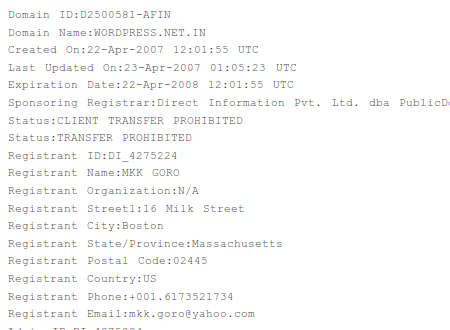 A little over 3 years later, after at least 31 changes in domain registration information, the domain is still supposedly registered to some guy in Massachusetts, although not to the same person: 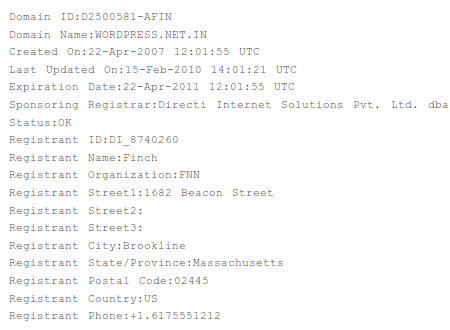 The domain has been used for these hacking activities the entire time it has existed. There has never been a legitimate site residing on it.

By checking the IP address of where the site is now, it appears to be hosted by a firm operating under the name Extended Host Inc, which according to their whois information is located in Canada. However, they don’t seem to actually have a website where someone could get hosting services, and their IP is located over in Amsterdam. This is what Spamhaus had to say about Extended Host: 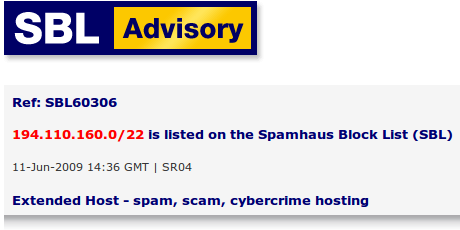 While none of this actually tells us anything about who the real owner of the domain is, what it does tell us is that there is very little that can be done about it. The hosting company is a scam, so there is no one to contact to have them take the website down. Even if the current bandwidth provider did decide to take action against them they could simply move to a new provider. There are plenty of hacker and spammer friendly hosts out there to choose from. The sad truth is that there is little that honest concerned netizens such as you or I can do to take a website like this offline. It is a shame, too, because taking the website down would mean that the hack it is being used for, across however many thousands of WordPress installations out there that are infected, would no longer be effective. It would nullify the damage, even for those blog owners who do not know that they are hacked.

No, there really isn’t much that you or I could do about that site… but there is actually someone who could do something, if they so wanted. You see, the domain in question, wordpress.net.in, consists entirely of the WordPress trademark, a trademark owned by Automattic Inc, the company founded by one Matt Mullenweg, the original creator of WordPress. According to their website they are quite aware of the fact that using WordPress in a domain is a trademark violation, and trademark violations are pretty much the one thing that allows one person to legitimately take a domain from another person without their consent. According to the ICANN Domain Name Dispute Resolution Policy there are 3 conditions that must be met for this to happen:

In this case 1 is a no-brainer… the domain name is an exact match for the trademark in question. I am pretty sure that unless the owner of the domain name turns out to be one of the other founders of Automattic number 2 will pass the test without question as well. As for requirement 3, I don’t think you could really get more “bad faith” than deliberately using the domain name to hack other websites. If Matt actually cared he would have no problem wrestling control of that domain name from whoever it is that actually owns it, and shutting it down altogether, and yet he has done nothing about it for over three years now. Apparently Matt is so obsessively concerned with his crusade against non-GPL WordPress plugin and theme developers that he doesn’t have the time or energy to go after someone using his trademark to hack software he wrote. In his campaign against the evils of non-GPL he has even gone so far as to start banning people from speaking at or sponsoring Wordcamp events if they are “non-GPL-compliant” (a determination, btw, which is solely made by Matt and company, with apparently no procedure in place for appeals):

They are welcome to attend, but WordCamps may not have non-GPL-compliant people as organizers, sponsors, or speakers. Events that want to move forward and include such individuals in these roles may need to use a name other than WordCamp if the appropriate adjustments can’t be made. – Jane Wells, WordCamp “central liaison”

That’s right… if you wish to put the effort into organizing an event that promotes WordPress in your community, and you take the time to raise the money yourself to do so, but you happen to be a person who directly sells premium themes, then you damn well better not use their trademarked name for the event. If you want to spread viruses, hack servers, and promote spam, however… hell, feel free to use their core trademark in your domain name. It’s not like they are going to actually do anything about it.

16 thoughts on “WordPress Hacking, Matt Mullenweg, And Some Screwed Up Priorities”